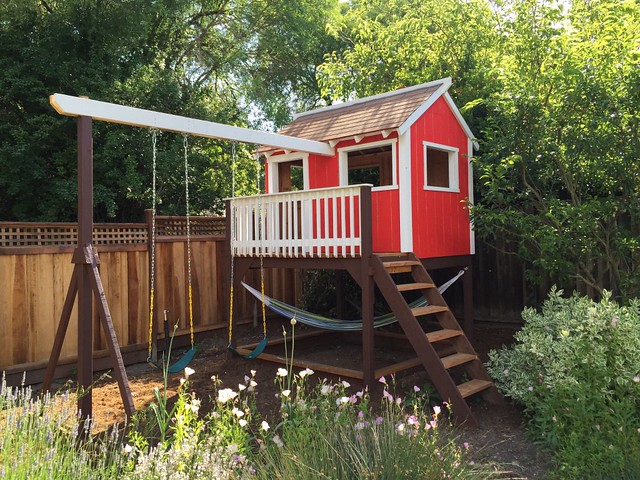 In the initial post I mentioned that a swing set should come out of the front of the playhouse and that it wasn’t a priority. I finally decided that I didn’t want a partially finished project. This needed completion for myself and as an example to the kids. To consider it complete, I’d need to build the swing set, finish painting, and decide on how to use the space under the playhouse.

The swing set was a bit of a beast. It required a ten foot 4x4 post supported on two sides by 2x4s running down and tied together with two 2x6s. They would all contact the ground and so needed to be pressure treated and rated for ground contact. That structure supports a pair of twelve foot 2x6s that run into the frame of the playhouse. Spacers at the playhouse end and at each of the two swing locations tie the beams together.

The 4x4 requires rabbits at the top and bottom to accept the 2x6s and a dado in the middle to accept the ties for the supporting 2x4s. I cut these on the sliding miter saw by taking slices out of the sections to be removed then chiseling out the waste. Unfortunately, I cut the top rabbit on the wrong sides. The middle and bottoms line up, but the top rabbet needed to be perpendicular in order to hold the main beam. The upside is, this wouldn’t compromise the strength of the joint. I opted not to re-cut the rabbet after realizing that I’d probably need to adjust its placement after getting everything set.

Making the supports for the post was straightforward. I cut the top angle of the 2x4s first. To ensure the bottom angle was correct, I screwed the bottom 2x6s to the post and set the 2x4s in place and marked them at the bottom of the 2x6s. After cutting the waste off, I joined everything together with the same bolts I used for the main support structure of the playhouse.

Creating the beam was even simpler. I cut segments off of a spare 2x6 and attached them with 3 inch screws from both sides. Each side has three columns of three screws. Two of the spaces are for hanging the swings. In order to hang the swings, a hole needs to be bored through the spaces, top to bottom. Not having a five and a half inch drill bit, I had to go in from both sides. That worked for all but one hole. I ended up going in at a slight angle and missing the other side. When trying to run the bolts for the hanging hardware through, I thought that hole was just tight so I banged the bolt in with a mallet and broke off a large chunk of the spacer. It was the bottom, so not a problem.

Now that I had the support post and the beam completed on the ground, I needed to figure out how to get them in place. A twelve foot 2x6 of still-wet doug fur weighs in at thirty pounds, meaning two of them together end up weighing sixty pounds. In a small package, that’s just heavy, but spread over a twelve foot span, it becomes very unwieldy. Being that I don’t have help, this became a real engineering challenge.

Angles were the key. I leaned the beam against the bannister and propped the support post against a ladder. Then grabbed the bottom of the beam and hefted it slowly up until the end rested on the roof of the playhouse. From there, I could climb the ladder with the other end. This is where might height came in handy. I have a six foot ladder and I’m six, four. The beam only needed to be ten feet off the ground, so I could rest it on my shoulder while temporarily attaching it to the post with a couple screws.

Knowing that I’d need to move the beam away from the playhouse in order to clear it away from the roof before setting in its proper place, I left the support post tilted toward the playhouse a few degrees. That gave me just enough space to push it away without ripping out the temporary fasteners. I did this all very carefully and with a great deal of anxiety. Honestly, I had no idea if it was going to work, or if everything would fall apart and crash back to earth. Somehow, it worked out and I set the beam in its place in the playhouse frame.

Squaring up the beam and the support post came next. I remove the temporary fasteners and got the post square using a level. Getting the beam level was a bit trickier. It needed to go higher on the post than I was comfortable with, but with some careful straining, I managed to get it level and, temporarily, reattached. Now for the remaining rabbets. I brought a line across and marked out the side opposite where the beam was, then cut the rabbet with a hand saw. After lifting the beam up and over the post and resting it in the rabbet, I cut the other side the same way. With the rabbets done, I lifted the beam on last time and dropped it in place. A few bolts to secure it and hardest part was done. I secured the playhouse side with a couple of steel plates and a bunch of screws.

For a few seconds, I considered making the swings myself using rope and some boards. I came to my senses and bought them, instead. Unfortunately all the swings I could find came with chains that would have been about three feet too short. That was easy enough to fix with a trip to the hardware store - plus, it gave me an excuse to buy a pair of bolt cutters. I had Annika stand under the swing and measure out the required length of chain. After everything was attached, we had a swing!

A couple reviews of the playhouse plans had mentioned measurements being off. Until this point in the project, things had worked out just fine. However, for some reason the placement of the swing closest to the playhouse would have put the chain only an inch from the railing around the porch. So, I had to unscrew the spacers and slide them over about eight inches. I should have double checked

Annika had a blast swinging and the structure held with very little wiggle. I decided to give it a try. The swings and hanging hardware are rated at 250 pounds. I have no idea what the beam is rated at. I weigh about 200. Gently swinging, things were rock solid. I decided to push it by pumping as hard as I could. The post rocked quite a bit, the playhouse shook a lot and there was a very loud creaking coming from the joint between the playhouse and beam, but it held. I’m calling that a success.

Without paint the playhouse was still passable - it looked fine. However, I wanted to protect the wood. I slapped on a coat of paint - brown for the support and white for the beam. It was messy, but made the whole thing pop.

Figuring out what to do with the space under the playhouse came out of nowhere. I realized that it’d be the perfect place for a hammock. The posts provided support and the floor of the playhouse created shade. It was out of the way and quiet - a great place to lay and nap or read a book. Of course, once the hammock was up, the kids completely ignored the swings.

I’m glad to have it completed. It feels good to know that there’s nothing left. I can move on to other projects without guilt. On to the next thing.